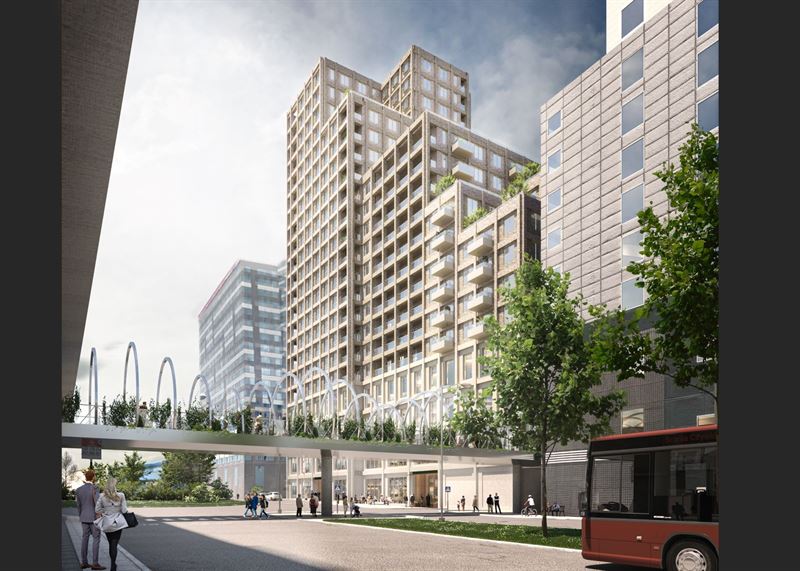 In conjunction with Kista Galleria celebrating its 45th anniversary, Citycon is presenting major redevelopment plans for the shopping center and surrounding area. The major investment will result in 300 new homes, as well as new green areas and more vibrant public spaces by 2030, all with the overall aim of making Kista a more attractive area.

Citycon, owner of Kista Galleria and 33 other shopping centers in the Nordic and Baltic countries, today announces a major development project for central Kista. Citycon, listed on the Nasdaq Helsinki Stock Enchange, will expand its property portfolio by 65,000 square meters in and around Kista Galleria by 2030.

“Kista is one of the most important city districts in Sweden and the Nordic countries. Here, business, innovation and multicultural everyday life come together in a unique mix. In order to ensure that the district’s enormous future potential is realized, we need to inject more life and activity into the central areas frequented by the general public, by bringing people into them during more hours of the day. By filling the areas with life, we make Kista more attractive", says Veronica Palmgren, Urban Development Director at Citycon.

Citycon’s project is one of several ongoing initiatives in Kista and it is supported by the City of Stockholm.

“The development of Kista Galleria and its surroundings is important not only to increase security but also attractiveness in Kista, which will attract talent and companies of the future. Together with business and academia we have initiated the Nordic’s largest urban development project – where over 20 billion SEK is invested in properties and public spaces”, says Anna König Jerlmyr, Mayor of the City of Stockholm.

The public areas that Citycon aims to refurbish and activate include Kista torg, Jan Stenbecks torg och Kista busstorg – through which about 56,000 people and around 20 bus lines pass each day. Jan Stenbecks torg will become a stop on the new Helenelund branch of the tvärbanan tram line in 2025. To create a more attractive urban environment around the center, Citycon is also investing in new green areas. The roofs of the buildings will be transformed into 10,000 sqm green spaces filled with plant species native to the Järvafältet area.

Two new buildings, directly connected to the center, will contain residential housing close to the retail area, as well as premises for education and health providers. The aim is to create a cluster for health facilities and healthcare companies, similar to the Citycon-owned Vårdhuset in Liljeholmen. Directly adjacent to Kista Galleria, with its 130 shops, the city district’s original design as an “ABC-town” will be reinforced – and upgraded.

“Our properties in Kista are more than offices, retail centers and residential spaces. They form the most important interaction point in the Järva area. This comes with great responsibility. Therefore, we have invested over 100 million SEK in modernizing Kista Galleria over the last two years – as part of our urban development that now continue", says Niko Paleovrachas, Commercial Director at Citycon.

By giving the foodcourt M.E.E.T and “Kistagången” a facelift, Citycon wants to strengthen Kista Galleria’s role both as an attractive meeting place and local center.

“During the pandemic, Kista Galleria’s role as a local retail center became even more apparent, and our investment in premises for healthcare providers became even more important. Together with the City of Stockholm, the region and other property owners in the area, we look forward to building a safer, greener, and more vibrant Kista – a kind of ABC town 2.0”, says Niko Paleovrachas.

Citycon is a leading owner, manager and developer of mixed-use real estate featuring modern, necessity-based retail with residential, office and municipal service spaces that enhance the communities in which they operate. Citycon is committed to sustainable property management in the Nordic region with assets that total approximately EUR 4.5 billion. Our centres are located in urban hubs in the heart of vibrant communities with direct connections to public transport and anchored by grocery, healthcare and other services that cater to the everyday needs of customers.