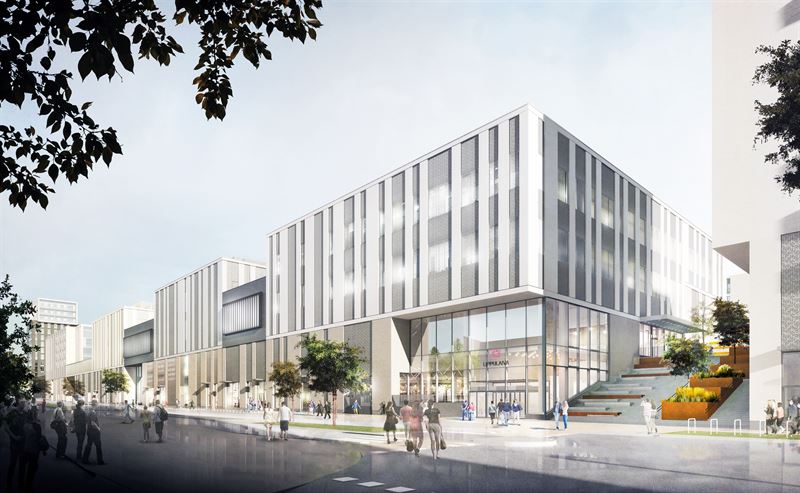 The new Lippulaiva will open in spring 2022. The leasable area of Lippulaiva will be 44,000 square metres and it will house approximately 80 retailers and services. The shopping centre will be visited by an estimated eight million customers annually. A temporary pop-up shopping centre, Pikkulaiva, will serve residents of the Espoonlahti area throughout the construction period until the new shopping centre is completed.

Eight residential blocks, housing 450-500 new apartments, will be built in the immediate vicinity of Lippulaiva. These blocks are not part of the contract that was now signed. Estimated, staged completion of these residential units is between 2022 and 2024.

“Lippulaiva is also an excellent example of how Citycon is putting its new strategy into practice. This means focusing even more on developing mixed-use projects and densifying the urban environment around our shopping centres.”, says Citycon´s Chief Development Officer Erik Lennhammar.

The new Lippulaiva shopping centre will be a centre for local services in the rapidly growing greater Espoonlahti area. The shopping centre will be anchored by extensive and excellent grocery offering, e.g. Prisma, K-Supermarket, Lidl, Tokmanni and Alko. Lippulaiva will also host a wide range of cafés and restaurants, public services and other amenities for smoother living.

Lippulaiva will also function as a key public transport hub. A station of the second phase of the western metro extension and a feeder bus terminal will be located under the shopping centre. An estimated 14,000 passengers will use the Espoonlahti metro station daily. In addition to the excellent public transport links, there will be a multi-storey car park with approximately 1,300 spaces and parking for the same number of bicycles at the shopping centre.

“The location and commercial concept of Lippulaiva have proven attractive: the occupancy rate of premises is currently around 60%. We will build a lot of new homes right next to the shopping centre and public transport terminal, not just retail square metres,” says Erik Lennhammar.

Construction of the geothermal energy plant began in spring 2017 and the work has progressed considerably.

“The wells have now mostly been drilled and work corresponding to around 60% of the total investment in the energy plant has been completed. The drilling revealed that the bedrock is of better quality than the preliminary simulations estimated. The energy generated by the facility will meet all the shopping centre’s needs and possibly some of those of the planned residential units nearby,” Timo Koljonen, Vice President Geoenergy at Adven, says.

Citycon is a leading owner, developer and manager of urban grocery-anchored shopping centres in the Nordic countries. The total value of the property portfolio managed by Citycon is approximately EUR 4.5 billion. Citycon is the leading shopping centre owner in Finland and among the market leaders in Norway, Sweden and Estonia. Citycon has also established a foothold in Denmark.